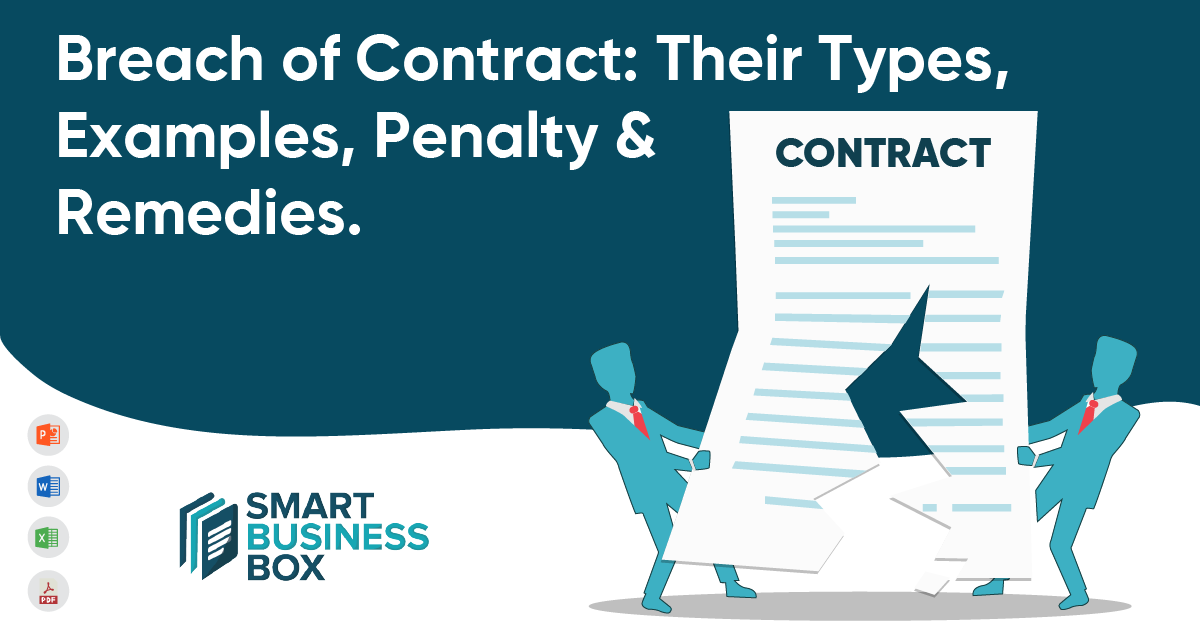 4 Types of Breach of Contract With Example & Penalty 2022

by Waqar Azmi April 18, 2022
Breach of Contract
Share and Get Free Business Docs

The term ‘Contract’ is the promise between two or more parties that is enforceable under the law. The word ‘Promise’ signifies what the parties are legally allowed to do and what they are not legally allowed to do. The contract is formed when the offer presented by one of the parties gets accepted by the other party. The offer presented by one party should be clear and definite. The acceptance should be unconditional and absolute. Accepting an offer with a condition becomes a ‘Counter Offer.’  The first offer stands to be cancelled. The offer can be formed either verbally or in writing. The offeror is the person that makes an offer, and the offeree is the person to whom the offer is being made. The contract is the agreement created with the mutual acceptance of the terms and conditions by all the parties. Such terms and conditions direct the parties regarding the following:

If both parties do not adhere to the individual obligations, then the other party has the right to file a legal case against them.

What is a Breach of Contract?

Breach of Contract is defined as the failure to fulfil the contractual obligations by one or more parties under the contract. The party that has breached/violated the terms of contract is called the defaulting party. The other parties are called the Aggrieved parties. The aggrieved parties can file a lawsuit against the defaulting party in the court. In every contract, each party must complete their individual obligations. When each party fulfills their promise, the contract stands to be discharged, and if they fail to adhere to the terms, the contract is said to be breached.

Types of Breach of Contract with Example

Binding Contracts are violated in multiple forms. Let’s now consider the most common types of contract breach that is happening worldwide along with some relevant examples:

The anticipatory breach happens when one party of the contract informs well in advance about the performance delay to the other party due to an anticipated shortage of supplies.

However, no verbal or written confirmation is required, and a breach might occur if any duty is not met on time. By claiming an anticipatory breach, the counterparty can take legal action right away rather than waiting for the contract’s provisions to be violated.

Example: Let’s take the example of an automobile manufacturing company, ‘Mahindra and Mahindra Limited.’ They had a contract with Orix, a leading car leasing services provider, to produce 500 vehicles. M&M has informed Orix about the delay in performance due to an expected shortage of batteries in 2 or 3 months that might arise because of foreseen market circumstances before signing a contract. The expected lack of batteries, let’s say, is due to the shortage in supply of raw material that has taken place at the primary raw material manufacturing unit. It’s an anticipatory breach as the Orix is informed in advance about this delay.

When a breach occurs, the other party has numerous options for resolving the situation. These include compensatory damages to compensate for direct economic losses caused by the breach, as well as consequential losses, which are indirect losses that exceed the contract’s value yet are caused by the breach.

Example: Dell Inc signs a contract with Capgemini India Pvt Ltd and promises to deliver the 500 laptops for Capgemini by February 20, 2022. But Dell failed to fulfill his side of obligation due to raw material shortage and asked for a 1-month extension from Capgemini to deliver 500 laptops. Since Dell could not provide the 500 laptops by the committed delivery date, i.e., February 20, 2022, we can say that the ‘Actual Breach of Contract’ has taken place. It will lead to severe repercussions for the productivity of 500 Capgemini employees as they would not be able to do IT coding without laptops.

The Material Breach happens when there is a significant variation in the delivery of the performance of the promised goods/services. Inability to meet the responsibilities stated in a contract or failure to perform contracted obligations on time are examples of material breaches. When a major breach occurs, the opposite party may seek damages for both direct and indirect consequences of the breach.

Example:  A business contract between a Mumbai Coworking (Coworking Space) and an Asian paints painter! The Mumbai Coworking hires an Asian paints painter to paint the interior of the company and specifies in advance to use a brand of Asian Paints with a cloud grey colour. The painter completed the contract terms by painting the company’s interior wall with the specified colour, but he used a different brand, let’s say – Berger Paints, instead of Asian Paints to save the money. Here, the Asian paints painter is said to have made the Material Breach of Contract by providing services that differ from what was communicated to them by the company.

A minor breach happens when one party fails to fulfill a small part of the contract and completes all the crucial obligations for the other party. In this type of breach, the general agreement is not violated, and it still can be accomplished in a specific way.

Example: A business contract between a Concentrix company, a call centre company, and Raj Traders, a mobile phone supplier company! Raj Traders forms a contract with Concentrix where they promise to deliver the 100 Samsung phones along with a charger and a phone cover to its employees. Raj Traders provides 100 Samsung phones to Concentrix at the due date along with the charger but asks for a week’s extension to provide phone covers for all the phones. Let’s say it’s due to the sudden increased demand for phone covers after the covid 19 pandemic. Although we can say that the Minor Breach has taken place from the side of Raj Traders as they cannot supply phone covers on time, that’s not going to affect employees’ productivity.

In the contractual language, the word ‘Penalty’ refers to the punishment/compensation given to the defaulting party for the breach of contract. A penalty clause says that the defaulting party is liable to pay the fixed/variable penalty amount as the punishment to the aggrieved party. It’s decided at the time of forming the contract. The penalty is proportionate to the loss that’s likely to happen due to the breach of contract.

The penalty is charged to create the fear of outcomes in the breaching party so that they do not breach the contract. As per section 74 of Indian Contract Act, 1872, there is no difference between the penalty and liquidated damages. The court assesses the breach of contract case and summons a reasonable penalty to be paid by the defaulting party. The sum of the penalty amount declared by the court can be less or more than what the parties have already fixed or agreed upon in forming the contract.

“According to the 1962 Conventional Penalties Act, Roman law will be followed further in India, removing the English law. The law carries out the penalty clauses, where the court holds the right to decrease the overall penalty from what’s fixed in the contract papers.

On March 5, 1962, it removed all the differences between liquidated damages and penalties. The court helps both parties by comparing the penalty charged with the actual loss. Law also keeps in mind how much loss the aggrieved party has suffered.

After evaluating both situations, the court makes its judgement. The judge then states if or not the penalty charged is aligned with the damages that occurred. It tells us that the penalty declared by the court, keeping in mind the penalty clause, is fair and reasonable for both parties.

In contrast to this, the party has the authority to claim only one thing out of these two, i.e., penalty or liquidated damages. With no means, they can claim both at the same time.”

Remedies for the Breach of Contract

Most contracts have remedies for the breach of contract to compensate for the loss faced by the aggrieved party. Following are the treatments available for the Breach of Contract:

If one party breaches the contract, the aggrieved party is no longer required to perform their obligations under the contract. Henceforth, they assume that the contract has ended completely. The Suit for Rescission is meant to obtain the contract cancellation.

The aggrieved party does not claim the money as a solution to the damages done by the defaulting party. Instead, it asks the court to tell the defaulting party to complete the performance/commitments mentioned in the contract. Suit for Specific Performance happens when the money provided as a remedy is insufficient to compensate for the loss due to the breach of contract.

Quantum Meruit means ‘as much as earned.’ For example, suppose one party supplies goods or services to the other party at their request, and the compensation in return is not decided while forming the contract. Instead, the law determines the suitable compensation for the party who provided the goods or services to another party. Then, based on the circumstance, good/service’s actual value, and contract, the court declares ‘how much’ and ‘what should be the compensation.

The Suit for Damages aims to help an aggrieved party by letting it retain its original position. It goes back to the same status that it was before the contract. It provides monetary compensation to the aggrieved party as a remedy to overcome all the loss it suffered due to the breach of contract by the defaulting party. You are eligible to file a case if you faced the below damages.

General damages are the natural and direct loss suffered by the aggrieved party due to the contract breach by the defaulting party. The party suffering the losses must prove to the court all the claims through relevant evidence. They also need to quantify damages and file a claim accordingly.

The fixed bracket of compensation amount in the form of penalty and liquidated damages is decided during contract formation for the contract cancellation. It is the amount that the defaulting party will pay to the aggrieved party.

Liquidated damages are the fair estimation of the loss and maximum limit of the compensation amount given to the aggrieved party. The penalty is a fixed amount for the losses and not a fair loss assessment. The purpose of the penalty is to punish the defaulting party and restrain them from breaking the contract.

Exemplary or Vindictive damages are claimed by the aggrieved party when the loss they suffer due to the breach of contract has affected their goodwill, mental health, and reputation in the market. The court adjudicates the defaulting party to pay the exemplary damages and the ordinary damages to the aggrieved party.

The sufferer party needs to prove all the losses to the court that they faced after signing the contract. It helps them claim compensation for the special damages that took place. Let’s consider a case where a breach of contract has caused considerable losses to one of the parties, but it favours society. The net cost to breach the contract is lesser than the net cost to uphold the agreement. In such cases, breach of the contract is considered economically efficient irrespective of whether one of the contract parties suffers enormous losses. Most economists recognize such a breach of agreements with “Kaldor-Hicks Efficiency.” It states that society becomes better if the winning party’s profits overpower the failures faced by the losing party due to the breach of contract.

Breach of Contract
Share
14 / 15
has been added to the cart. View Cart
Get Access To 1200+
Business Documents